Sheffield United were promoted to the Premier League as Leeds United drew with Aston Villa. Promotion means the Bramall Lane side will play in the top flight for the first time since 2007.

“It’s one of the greatest days of my life, 100%,” an emotional manager Chris Wilder told BBC Radio Sheffield, “To see it over the line today, surrounded by my players and my family, to see us back in the Premier League is truly incredible. What a day to be a Blade. Next season will be a fabulous experience for everyone involved.”

Sheffield United celebrated their promotion with an open-top bus parade and civic reception, which attended by 10,000 fans. 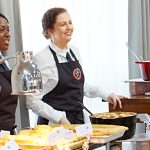 How to get a job at Bramall LaneNews